While I’m in the process of mobilising my Death Guard, I’ve been unpacking all my old models from the boxes where they’ve been collecting dust for the past 20 (!) years. Back in the day, I had a small force of Ultramarines. 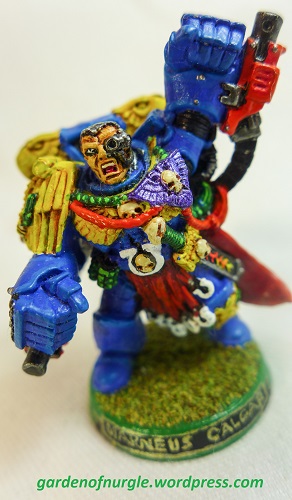 I mainly used Scouts, which in my teenaged 2nd Edition mindset I thought were the most broken things ever. Seriously, I thought I’d busted the game in half when I came up with my Scout spam strategy! In my defence, I was about 16, and this was before the age of internet forums and so on, so it was much harder to analyse the metagame. I didn’t like the official Space Marine Scout models, so I used House Cawdor miniatures from the old Necromunda game instead and painted them up in a jaunty mixture of Ultramarines livery and hot pink tracksuit pants.

It’s fun for me to look back at my old army and reminisce. There are so many memories tied up in these small chunks of lead. (Yes, this was back when game companies actually thought it was a good idea to sell children toys made of toxic metals…) Some memories of exciting victories, and some of crushing defeats. Not just on the battlefield, but that’s a whole other story…

I’m actually surprised at how not completely terrible some of my old paint jobs were. I always loved the painting part of the hobby. When I look at my Ultramarines closely, I can see plenty of examples of lazy painting, especially the shaky edge highlighting and thick paint, but overall I think they’re still decently table-top standard.

The door of that Rhino has a little freehand scene, based on a tattoo that I got in my late teens. I know, I know, but teenage years are meant to be a time of mistakes, right? The door / tattoo depicts a colourful day-&-night scene in the shape of a yin-yang. Quite out of place on an armoured personnel carrier of the grim, dark 41st millenium.

My tanks show some of my first attempts at conversions. The Hunter-Killer Missile on the Rhino was probably my very first wargear customisation. My little playgroup weren’t very competitive, and we never played any tournaments, so wargear was hardly ever represented on the model. WYSIWYG (What You See Is What You Get) modelling wasn’t a thing yet, as far as I can remember. So we usually just slapped together whatever came in the box and then called it whatever we wanted it to be on the day. So my converted Hunter-Killer was quite a big step up for me at the time. I don’t remember where I got the missle bit from.

The other tank shows my first sculpting effort. (Along with some truly woeful edge highlighting…) The front of the Predator has a skull, sword, and Ultramarines omega symbol sculpted on with putty. This was before Green-Stuff and all those modern high detail modelling putties, so I was using whatever I found in the local hardware store, probably gap filler intended for carpentry.

I think my sculpting skill improved slightly for my next, and final, effort. Sadly, the same cannot be said for my judgment. I didn’t like the old Space Marine Dreadnought model, and to be honest I still don’t. I think it looks too fat and chunky, and ridiculously impractical. A well aimed shot at the legs or ‘hips’ would be enough to take it out. On the other hand, I absolutely adored the Eldar Dreadnought (now called a Wraith-something, I think?) so I got one of them and painted it up as an Ultramarine instead. But that’s not the poor judgment I’m referring to. I mean the unfortunate choice of sculpted decoration my teenage mind decided was a good idea to stick front and centre on the Dreadnought’s head…

Hopefully I’ll soon be able to post the finished results of my Death Guard that I’m painting at the moment, and then my ancient Ultramarines can be the Before part of a Before-&-After of my hobby progress. 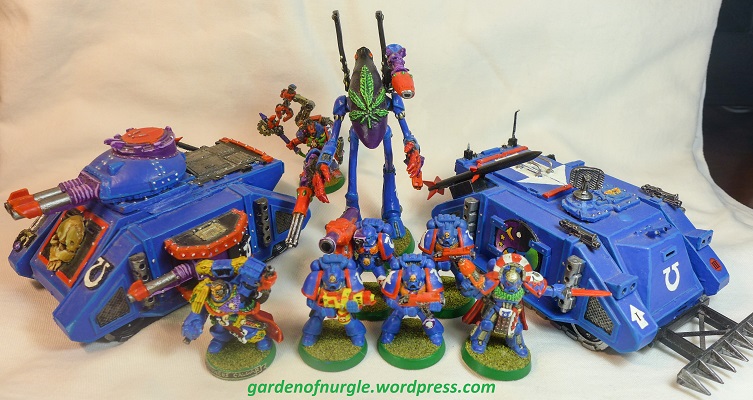