It feels good to get a brush in my hands! Last month I moved back home to Australia from China, where I’d been living for the past 5 years. There’s no 40K scene in the city I was living in, so as my hype for the game gradually built up in the months around the release of 8th Edition all I could do was soak up the excitement vicariously. But now that I’m back, I’m finally able to start mobilising my Death Guard. So without further ado, here’s my first completed model of my new army of Nurgle devotees:

I started with Dark Imperium, of course. The Plague Marines in the starter set were what drew me back to the game after almost 20 years away, so it’s only right that the first model I painted was my favourite one of them. Judging from some of the pictures I’ve seen other people post on Reddit and so on, this guy seems to be a lot of folks’ favourite Death Guard mini so far. (But that will be changing very soon, no doubt. I’m so excited for the upcoming releases!)

The only advantage of getting pumped up for it from afar is that I had nothing to do but watch YouTube videos, hobby blogs, and painting tutorials for months. I think that paid off reasonably well, because my first painting effort in two decades is much less shoddy than I expected. I know it’s nothing flash, but it’s a lot better than my paint jobs from back in 2nd Edition, and I’m pleased with how it turned out.

For the colour scheme I mostly followed my spiritual liege Maxime Pastourel‘s Plaguebones chapter scheme. The only major difference is that I decided to keep some green elements as a nod to the Horus Heresy-era Death Guard livery. 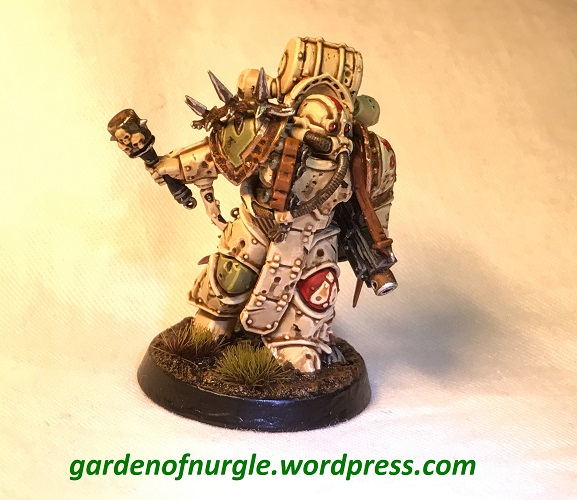 I also changed the basing scheme, for two reasons: firstly, I don’t know how Pastourel did the watery bases on his Plaguebones and I doubt I could do them even if I knew; and secondly because I’m planning to base my bases (ahem…) on the name of this blog! I wasn’t very adventurous with this one because it’s my first attempt, but I’m planning to have a Garden of Nurgle verdant swampy theme for my bases. I’ll post some more interesting bases and explain my plan in more detail when I finish painting some more units. I’m also waiting to get my hands on the new Skulls scenery pack from Games Workshop, and maybe also the foliage packs if they fit my theme.

I learnt a lot from experimenting on this model. The biggest change from what I remember of painting 40K in the 90’s is that the paints range has changed, and modernised, significantly. The paints today are awesome! I can’t get over how fun the Citadel Technical paints range is, I’ve been going nuts with Typhus Corrosion, Ryza Rust, Blood for the Blood God, and (on a model I’ll reveal soon) Agrellan Earth. The opportunities these paints open up are incredible! In my first model here, you can see the Stirland Mud texture paint I used for the base. In the rear picture you can almost make out the footprint I tried to sculpt from the Mud, but my photography doesn’t do the paint justice unfortunately. Apart from the Technicals, even just the Base, Layer, Dry, and Shade ranges are a lot better than they were in the past.

I also learnt that I still suck at fine details, such as line highlighting, and I also still hate dry-brushing. I don’t know how the pro painters manage such clean edge lines. I’m thinking of checking out prices for a jeweler’s glass to put on my painting desk as a magnifier. On the other hand, I’m pretty sure that being able to see the detail isn’t going to be enough, because it still won’t help to keep my hands steady. I’m sort of okay when the angle I’m painting at is perfect, but if I have to pick up the mini in one hand and hold my brush steady with the other hand I can’t stop wobbling. I might need to build some sort of bar structures onto my desk to give me stable points to touch while I’m painting.

I’m now working on painting four more Plague Marines so that this guy can have a squad of friends to battle with.  I’m also tinkering with a bigger modeling project: a Death Guard Rhino that I’m converting, magnetising, and “Nurglifying”.  It’s coming along nicely so far, and I’m looking forward to posting it here when it’s done.  For now I’ll just say that crackle-paint is the best thing since sliced bread!  Stay tuned.