Mushrooms in the Garden of Nurgle

Mushrooms are quintessentially Nurgle. They grow from rot and decay, spreading their contagious spores in the embodiment of the cycle of life and death. They come in many varieties: some nourishing, some lethally toxic, and some providing nightmarish terrors and delights. The Garden of Nurgle should be a fungal paradise, teeming with mushrooms.

I want my Death Guard to be depicted as marching through the Garden of Nurgle. I’m using a mix of elements representing the cycle of life and death to represent the Grandfather’s domain. For Death, I’m using skulls, bones, partial skeletons; mostly human, but with some animal carcasses too. So far I’ve avoided using dead xenos, because I like to think of Chaos as drawing power from human weakness and emotions, but I might broaden that eventually. I might also add some pools or streams of blood or rotten ichor.

For the Life side of the wheel of life and death with Nurgle personifies, I’m using a range of different flora. I’ve got tufts of swamp grass growing from moist, muddy soil; fallen leaves being trampled at my soldiers’ feet; and a few different types of flowers. I’ve got some carnivorous flowers ready to snap shut their jaws (as seen on my Plague Champion already), and some bright red flowers on creeping vines to represent insidious poisonous foliage (coming soon, stay tuned!). I got the pieces to model both of those from the Catachan camouflage kits. 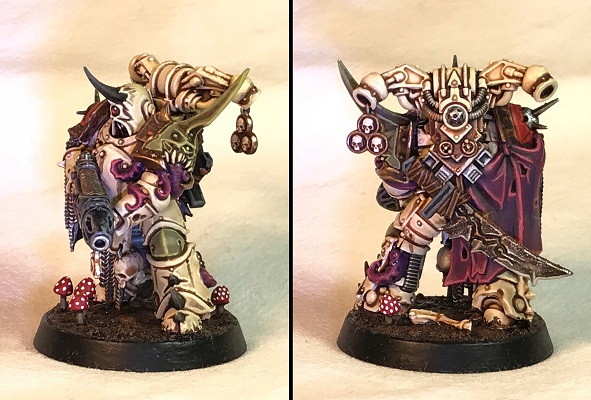 The mushrooms represent the interface between life and death in the cycle of nature. I made them from copper wire and Green Stuff. I decided to paint them bright red with white dots because I wanted a classic fairytale mushroom look, even though that might not be the most ‘Blanchitsu’ effect for a Nurgle army. At such a small size, they need the bright colour and iconic pattern in order to be recognisable and visually distinguishable from the surrounding swamp base and the abundant detail on the models themselves. If I ever make a single model showpiece or a diorama, for an art competition or something, I might go for subtler, more sinister forms for the mushrooms, but that wouldn’t work on an army wide scale.

Here are some more pics of mushrooms I’ve done from some works in progress, my Noxious Blightbringer and a converted Death Guard Rhino tank with a homemade base. More on those coming soon. 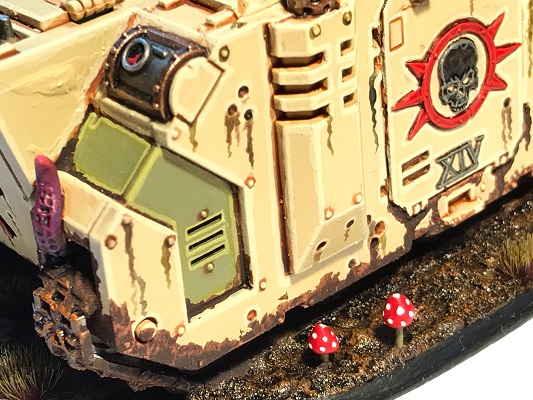 I experimented with a couple of different methods of attaching the mushrooms. The actual mushrooms are obviously really simple: it’s basically just a blob of Green Stuff on a short stem made of copper wire. The challenge for me was attaching them to the base sturdily enough that they wouldn’t break off at the slightest touch. My first method, which I used on the Plague Marine above, was to drill little holes in the base after it was fully painted, and threading the wire through from underneath, then bending a piece of wire under around the underside of the base to anchor the mushroom in place.  (See left-hand picture below for underside view.) That worked well enough, but it was a lot of hassle, and it could be annoying if I ever decide to magnetise the bases for transport and storage.

More recently I’ve done a pair of mushrooms linked together on a single piece of copper wire coiled or snaking flat along the top surface of the base, to provide enough surface area for super glue to give it a solid anchor. (The picture to the right shows that on my next Icon Bearer.) That’s much easier, but the wire needs to be covered over with Stirland Mud, leaving a slight mound on the base. That’s not a big deal though, and it’s easily hidden in base texture.

What do you think?  Are mushrooms the most Nurgle thing ever, or not grim-dark enough for you?  Leave a comment to discuss, and stay tuned for more pics of my Noxious Blightbringer and Rhino soon™.