Foetid Bloat-Drones are so much fun to paint! The guy took me a couple of months to get through because I’ve been swamped with other things, but I’m glad I finally got back to it and I’m really pleased with how it turned out.

It’s such an awesomely sculpted model; oozing detail but still elegant and even beautiful a Nurgly kind of way. I love the way the lines flow and the curves sweep back. Even with all the spikey bits and tentacles is still has a feeling of graceful poise.

I’ve already started putting together a second Foetid Bloat-Drone, and I’m planning to add at least one more to that eventually. I’d like to be able to field three or four together as a blitz squadron at the vanguard of my army. I armed it with Plaguespitters, because I think they’re objectively the best weapon option for Drones. They’re fast enough that short range isn’t a problem, and the auto-hits can be really important, particularly against elusive targets like flyers or models with hit modifiers like Alaitoc Aeldari. Once I have three or four Drones, I’d consider taking the one of them with a Fleshmower. It’s a fearsome close combat machine as long as it has the other Drones supporting it to help it make it into melee range.

This was my first attempt at a daemonic eye / gemstone. I toyed with a few options for how to do the eye, and eventually decided to keep it pretty simple, just a green-tinted black orb. I wanted something dark to contrast with the bone-white carapace, and something green to emphasise the Death Guard Green rotor tubes. I think it was actually a pretty clumsy effort at painting the eye, but you have to look at it really close up to notice that, so I can’t be bothered re-doing it. I painted a couple of small white splotches in the top corner of the eye to act as reflection glints, which worked well. However I then also put a layer of glossy Aardcoat varnish over the eye at the end, so when you hold it under a light it gets another natural glint reflecting off it, so I probably should have gone with one of those options but not both. 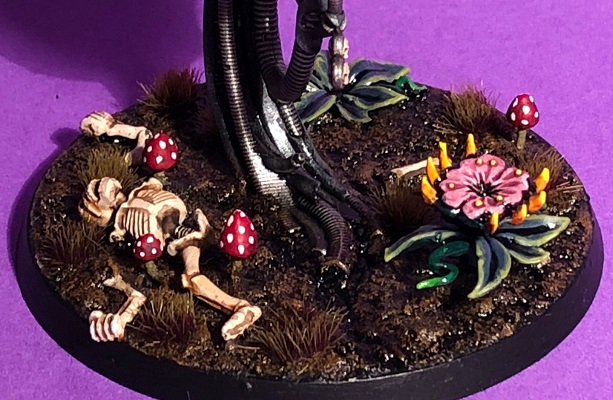 I had a lot of fun making the base. This is the first model I’ve done with such a large base and such a small contact point between the model itself and the base. That means there’s tons of prime basing real estate available! I stuck with my Garden of Nurgle theme. There’s a carnivorous flower, and also another little flower that hasn’t blossomed yet. The centrepiece of the base is a skeleton, with its limbs broken apart from the body, perhaps trampled by the passing of the XIV Legion, or perhaps just dispersed by the cycle of growth in the garden. Spread around the base are several clumps of swampgrass, and a few bright red mushrooms. The swampgrass and mushrooms are most densely clustered together around the skeleton, which is meant to show the cycle of decay and new growth, with the rotting of the carcass feeding the lush garden. 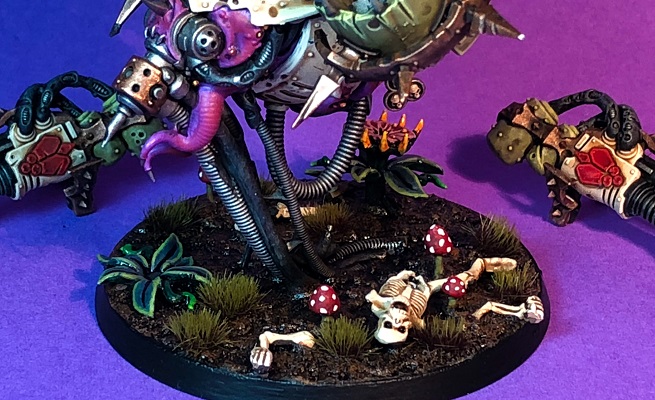 I magnetised the guns, even though I’m sure I prefer Plaguespitters. I actually started building and magnetising the Drone ages ago, shortly after the release of Dark Imperium,

before the Codex had been released. At that time we didn’t know whether there would be other weapon options available, but I didn’t want to gamble on being stuck with sub-par weaponry. As an added bonus, the magnets will make it easier to transport the Drone, and also make it easier to take photos of the details on the base! Plus, you never know which weapons might be nerfed or buffed in 9th Edition…

I’m still quite new to magnetisation, having just experimented so far on my Rhino weapon options. At first I put magnets just on the main join point of the guns and the body, where the gun’s spar thing connects. I used the largest size magnets I had, and they were strong enough to hold the guns on, but not

quite strong enough to hold them stable. They kept drooping a little, and there’s nothing worse than flaccid guns! So I added an extra magnet on each gun, on the end of the cable tubes, along with matching small magnets in the fleshy underside of the Drone’s body. (You can see all the magnets circled in blue in the pictures. They’re a bit hard to see because I painted over them.) The tubes are way too thin to bury magnets in, but the magnets kind of just look like cable connectors, which is fine by me. The extra pair of magnets keep the guns firmly pointing at the enemy lines.

The only thing I’m not happy about with this model is how long it took me to complete it.  Sometimes, life just gets in the way, y’know? But it kind of sapped my will power towards the end. I probably should have spent more time on the detail painting, particularly on the base.  The edge highlighting on the plants is atrocious. In the end I just decided to stuff it, because they’re unknown exotic plants growing in a daemon realm in the warp, so nobody knows how they’re supposed to look, so maybe they’re meant to have atrocious-looking edges… Anyway, that’s my story and I’m sticking with it! Besides, I think the rest of the model looks cool enough that nobody will pay much attention to the base, right?